There is always a big gap between what a woman wants in a sexual relationship and what actually happens in a relationship. The vast majority of men do not pay enough attention to what their wife wants or prefers in a sexual relationship, others blame the woman for not speaking directly about her desires, and some believe that everything he does is right and that in this way he pleases his wife. But no matter what a man thinks, we're here to talk about you, about your needs in intimacy, to try together to express what you really want, so if you find any of the following lines that express you and your needs, don't hesitate to send them to your partner, it might be the first step in opening the door to talk... 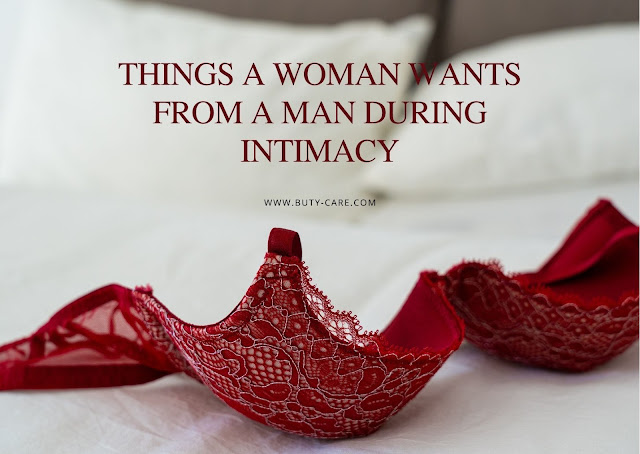 According to studies, the vast majority of women only want their partners to listen to them in intimacy. So if you're one of these women, then we've discovered your first desire for intimacy, which is "listening".

So ask your partner clearly and categorically, and ask them to really listen to what you're saying, If you ask to stop.. To stop. If you ask to keep caressing an area.. Keep going. If you cross that something hurts.. Get away.

Remember that this is simply your right to intimacy.

- How about taking care of hygiene!

And is there a woman who does not want her partner to be interested in his personal hygiene! Of course not.

Caring for a good body odor, a fresh breath, even nails and clean hair are all necessary things both in the sexual relationship and outside it. So if you're struggling with this, and you're too shy to discuss it with your husband, just send him this article, and he'll know right away.

The majority of men believe that women only want one sexual position and a specific place in the house for intimacy! Of course, this is not the norm; just as there are some women who prefer those things, there are others who yearn for a bit of change and diversity.

So it's okay if the husband asks his wife if she wants to change from time to time or not.

But if he doesn't ask, don't give in to the routine, honey, go discuss it with him, tell him what you really want. Share articles about new sex positions or some sex toys you can try together.

Well, most of us as human beings, whether we are women or men, love words of praise and flirting, let alone if they are between partners The words of flirtation are able to sexually excite some women and make them feel the desire for a relationship, and unfortunately a good number of men do not pay attention to it.

So if you really need flirtatious words and feel like they play a pivotal role for you, don't be shy about getting your partner's attention. But if it doesn't make a difference to you, that's fine, we're all different women and it's not necessarily what you want, you want it, and so on.

- Foreplay and kisses before sexual relationship

there are many men who ignore the interest in kissing or caressing their wives during intimacy. What men do not know is that there is a strong effect of foreplay and kisses on the wife because it will increase the feeling of euphoria in the woman. Once a man kisses a woman in these areas and starts fondling her, he makes his wife at the highest stage of arousal.

So if your husband doesn't really pay attention to where you are, just send him this article  What are the most powerful points that excite a woman during intimacy

- Choose the right time for intimacy

well, do you remember that scene common to most movies and series, when a man wants to have sex with his wife, regardless of what she feels at the moment, whether she is exhausted after a long and hard day, or she wants to sleep a little to wake up in the morning to carry out her tasks, as a mother, wife and working woman. Well, this is not just a movie scene, it's a fact.

But now that women are more aware of their rights, and know that they don't have to agree all the time, they refuse. They refuse not because of unwillingness to partner, but because they want a man to choose only the right time. So if you've brought this to your husband's attention, congratulations.

well, there are some men who have the conviction that sexual relationship should be like movies, and therefore demands his wife things beyond her power and ability.

But the truth is the opposite, the sexual relationship is different between each two, some are wild, some are romantic, it is up to the personal preferences of each two.

So the thing that most women would still agree on is that they want men to understand that sex isn't like movies.

So I tell you again, my friend, that you don't have to accept everything in this relationship, as long as you don't want it.

- Attention to the arrival of women to orgasmone

of the things that can be annoying in women is that a man reaches orgasm quickly without paying attention to whether she has enjoyed enough or not, especially if the man does not have any health problems and it's just a lack of attention. Are you facing the same thing!

Orgasm has "many faces": What is an orgasm? And what are its benefits?

Well, the next time before you start intimacy, talk to your husband with words of affection, tell him that you need more time either from foreplay or any of the acts and stages of the sexual relationship, and see how he will deal with it. Maybe he won't get better from the first time but don't be dictated from talking to him.

- Pay attention to what the signs say without words!

As you know, most women are raised not to express their wishes, of course we all fight those wrong things that you are raised to, but this war is not easy, so quite a few women tend to express signals without words, and she wants her husband to understand them.

We know that the process is a bit difficult, but until a woman has the full ability to express words powerfully and unabashedly, it is here that the man's role is to understand these signals. How?:

Marriage specialists say that a man should pay close attention to the physical expression of his partner, such as the degree of breathing, the movement of her body, her eyes, all this helps him to know whether his partner is ready to move on in the sexual relationship or she needs more foreplay, and it helps him to know whether the foreplay he is doing pleases her or he needs to try something else.

yes, it is the desire of every woman to be asked by her partner what she wants in the sexual relationhip Whether or not what he does during a sexual relationship satisfies her

He doesn't take it for granted and she's certainly happy about it.

So if a partner doesn't ask you, tell him that he should ask and in return give him clear answers.

Of course, there are many things that women need in a sexual relationship, and it varies from woman to woman, but we tried in the previous lines to talk about the things that the majority of women have in common and that they really want.