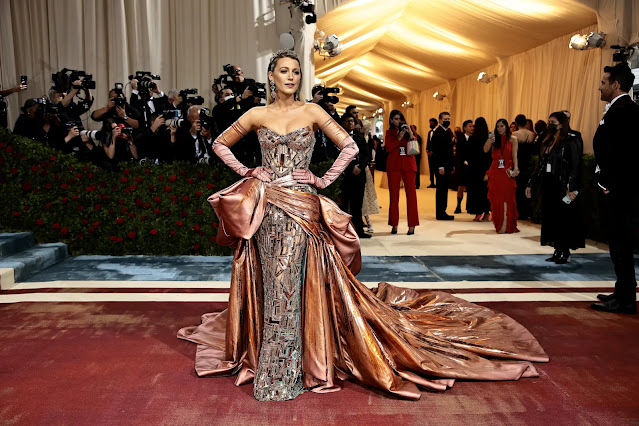 American actress Blake Lively honored the architecture of the American city of New York by wearing a glamorous dress, as she walked the red carpet at the "Met Gala" ceremony, Monday night.

Lively and her husband, Canadian-American actor Ryan Reynolds, presented the event, as the latter wore a classic tuxedo by Ralph Lauren in compliance with the dress code (glamorous outfits and white tie)

Lively starred in a "Versace" dress inspired by Art Deco design and detailing some of New York City's most iconic landmarks.

The glamorous outfits that shone on the red carpet on Monday night were inspired by America's thirty-year Golden Age in the late nineteenth century, which saw the wealth of industrial families in the United States skyrocket and the luxury fashion of the upper class in New York City. 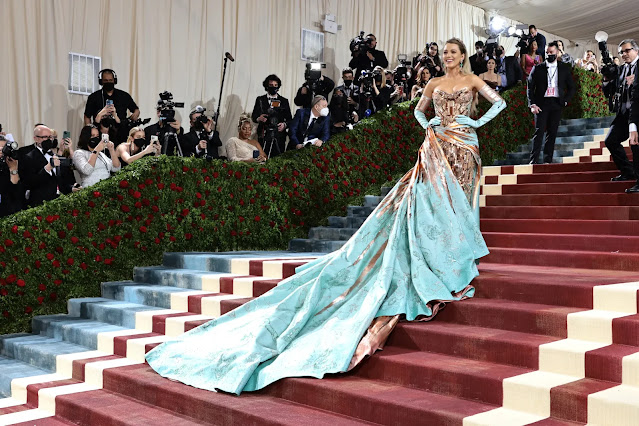 As soon as Lively arrived, the bright and dubious "Versace" dress with beads was wrapped in an oversized satin brass knot. But when she went up the stairs leading to the entrance to the Metropolitan Museum of art, she was unfastened to reveal the totality of the outfit, consisting of a long skirt in antique brass, as a tribute to the rusty color of the statue of Liberty.

"I've been freed," Lively told Lala Anthony during the Vogue live broadcast, noting that "this dress is a tribute to New York City and its many famous classic buildings".

"These are inspired by the Empire State Building , and some parts of the statue of Liberty".

The crown accessory was the star of the ceremony, with Lively wearing one of them. Its crown consisted of seven protrusions, named after the crown of the statue of Liberty, which symbolized the seven continents. The actress explained that she represents "inclusiveness, welcoming, freedom". She also asked jewelry designer Lauren Schwartz to display 25 stones for iconic statues.